One of the first studies to scientifically test the impact of Montessori education suggests that Montessori schools can foster social and academic skills that are equal or superior to those in certain other types of schools, the authors report in the 29 September 2006 issue of the journal Science, published by AAAS, the nonprofit science society.

Montessori education takes a different approach from the traditional by employing multi- age classrooms, student-chosen work in long time blocks, the absence of grades and tests and a special set of educational materials.

Angeline Lillard of the University of Virginia and Nicole Else-Quest of the University of Wisconsin, Madison studied two groups of five- and 12-year-old students in Milwaukee, Wis. The results indicated that by the end of kindergarten, the Montessori children performed better on reading and math tests, as measured using the Woodcock-Johnson Test Battery that assesses letter-word identification, word attack and applied math problems.

The Montessori 12-year-olds wrote more creative and sophisticated narratives, performed better on a test of social skills, and reported feeling a stronger sense of community at their schools, the authors said.

"Inner-city children who attended a well-implemented Montessori program were found to have social outcomes that were superior to those of children attending traditional schools," said Lillard."And they had academic outcomes that were at least as good on all measures, and on several measures were better," she added.

Lillard was drawn to study Montessori education by its close alignment with research on learning."I decided to do a study to see if it actually makes a difference," Lillard said. Usually parents are the major influence in a child’s social skills but this research shows Montessori education fosters improved social and academic skills, Lillard explained.
Funding was provided by the Jacobs and Cantus Foundations and sabbatical fellowships from the Cattell Foundation and the University of Virginia. 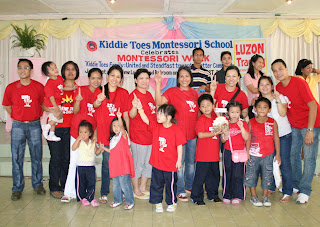 
1. Children deserve parents who make sure that they find the support and nurture that they need so they can wholeheartedly love them.

2. Children deserve parents who love one another and treat each other with kindness and respect even if the marriage doesn'’t last.

3. Children deserve parents who like themselves and who have creative work that they enjoy in addition to their employment.

4. Children deserve parents who like their work and want their children to know about it and why it’s important.

5. Children deserve parents who remember that when children spill the milk that they used to spill it too.

6. Children deserve parents who will rock them to sleep with a lullaby and tuck them into bed with a story and kiss.

7. Children deserve parents who will take them for a walk through the fall leaves rather than buying them another toy.

8. Children deserve parents who take them to the library regularly and come home with arm loads of books about people who dream great dreams and overcome immense difficulties.

9. Children deserve parents who are willing to slow down from the rat race long enough to enter into the wonder of discovery with them.

10. Children deserve parents who allow them to work alongside, at their own pace, and with appropriate jobs so that each can feel a sense of accomplishment on completion.

11. Children deserve parents who are very selective about television watching, who study the program guide to know what quality programs exist and who will spend time reading or playing games instead of lazily flicking on the switch.

12. Children deserve parents who have an extended family network of support and back-up nurture.

Source:
http://www.montessori.org/story.php?id=251
Posted by Kiddie Toes Montessori at 3:03 AM No comments: